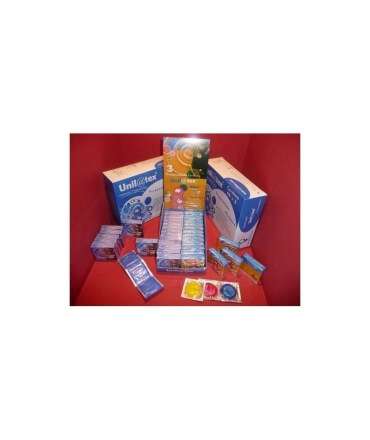 Condoms Unilatex are manufactured with the latest and most advanced european technology, through the use of the latex of the highest quality. Are tested individually, following the norms of international control: EN ISO 4074:2002.

Follow please the instructions introduced within this box. Male condoms made of latex should be stored at room temperature in a dry and cool place, away from direct sunlight.

The use of condoms, in addition to its importance in relation to the security of the contraceptive and sexually transmitted diseases, may be an ally in the discovery of new sensations and aid to a sexual relationship lasting and sensational.

How to use a condom:

1. Ripping the packaging open carefully. Beware of the nails, teeth and sharp objects may tear the condom.

2. Put the condom over the erect penis prior to any sexual activity, since it is possible to lose drops of seminal fluid or sperm prior to ejaculation. Tightens the tip of the condom (the reservoir), so that there is no air inside stuck.

3. After this, unroll the condom down to the base of your penis. If you have difficulties to unroll to the bottom, not puxes with great force! You may be on the contrary - we throw out and use another.

4. Withdraw immediately after ejaculation still erect penis, while holding the base of the condom.

5. Close the condom by using a node and put it in the garbage. Do not use again! Use a new condom for each sexual intercourse.